CMG shows up in flying colors for the LGBT community

Cox Media Group believes that a diverse group makes for a better workplace, and a stronger community as a whole. That is why Ideabar’s parent company demonstrated its support of the LGBT community throughout June, which is celebrated nationwide as Lesbian, Gay, Bisexual and Transgender Pride Month.

Pride my ride: Leading up to and during the Pete Pride Parade, Florida’s largest pride event, the team at HOT 101.5 cruised the streets of Tampa-St. Pete in style. 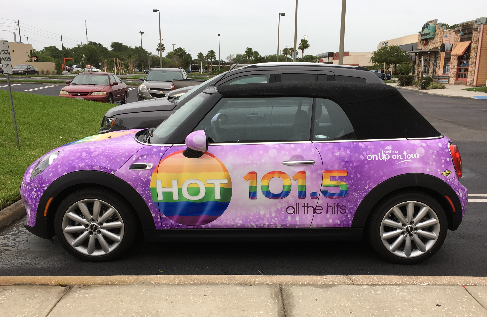 Double rainbow: Jacksonville TV showed its true colors by organizing the purchase and distribution of 200 rainbow ribbons through the Orlando Ribbon Project and donating proceeds to the GLBT Community Center of Central Florida. Jacksonville TV staffers also remembered the 49 lives lost in the 2016 Pulse nightclub shooting by handing out ribbons at the University of North Florida Student Union and attending a discussion at the UNF LGBT Resource Center.

Pride on parade: The team at FOX23 not only sponsored the Tulsa Pride Parade but also met with representatives from Tulsa’s Dennis R. Neill Equality Center to gain a better understanding of the local LGBT community.

Advocate and ally: The Greater Dayton LGBT Center recognized “Dayton Daily News” reporter Amelia Robinson as one of its outstanding allies. As a member of the Dayton’s Faces of Pride Court, Robinson said, “I get to wear a sash and that’s great, but the true honor is being able to tell Dayton’s stories.”